Opens in a new window
Skip to content
WHAT ON EARTH?

Can you spot the hidden animals that use cunning camouflage?

By Hayley Dunning and Lisa Hendry

Animals have evolved a range of camouflage tactics, from simple colour matching to sophisticated mimicry.

See if you can spot the creatures in the photos below - drag the slider to reveal them. Will millions of years of evolution outwit you? 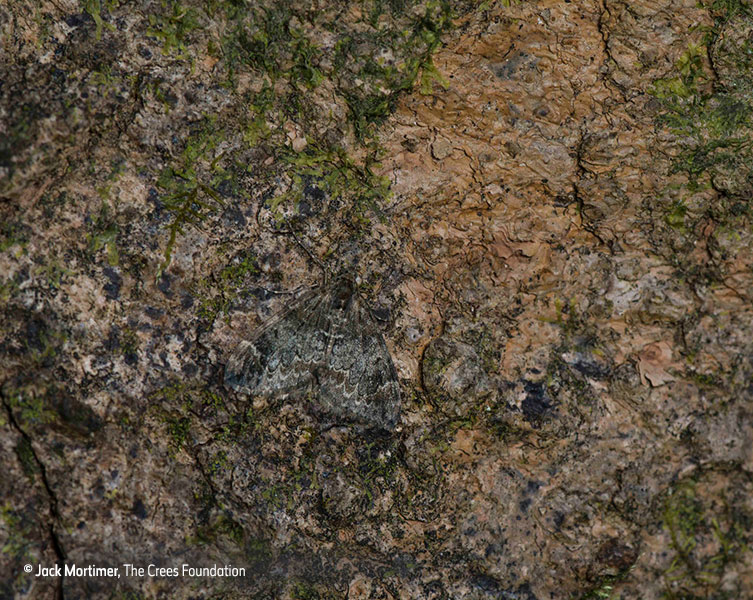 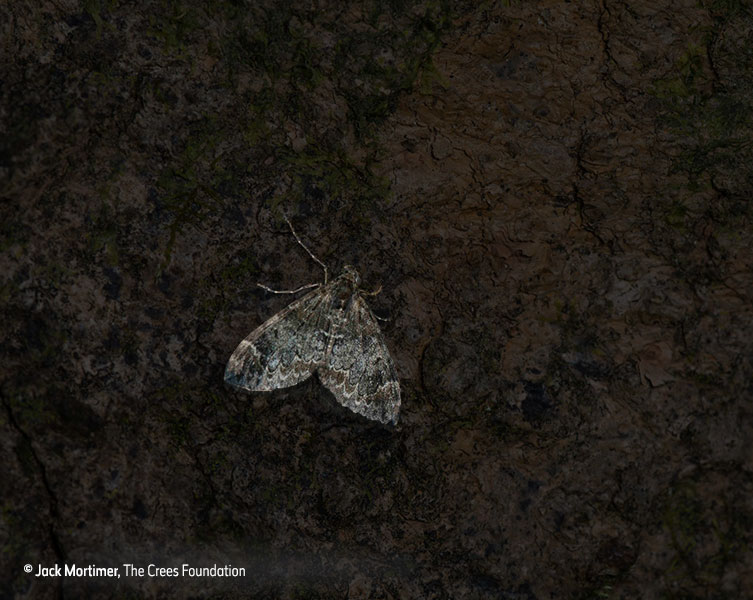 This moth is able to remain hidden in plain view by matching its colour to its background.

Some forms of colour matching are even simpler, such as polar bears hiding against the white Arctic ice. 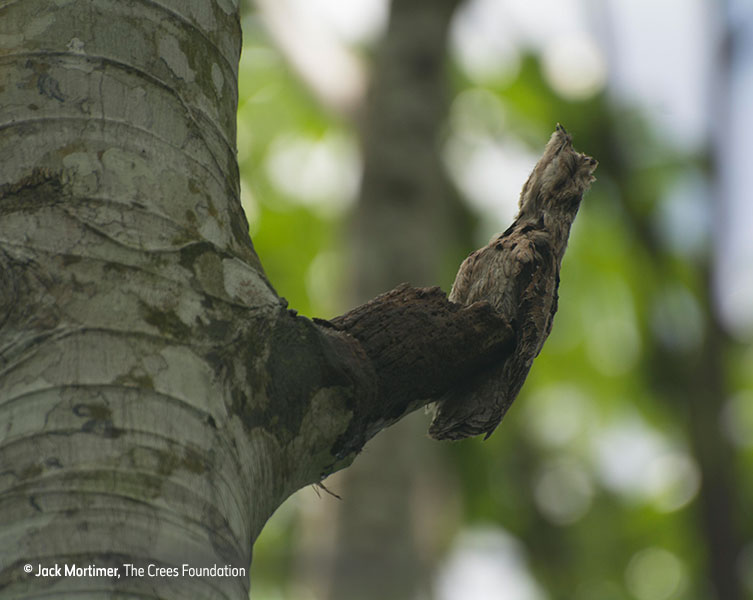 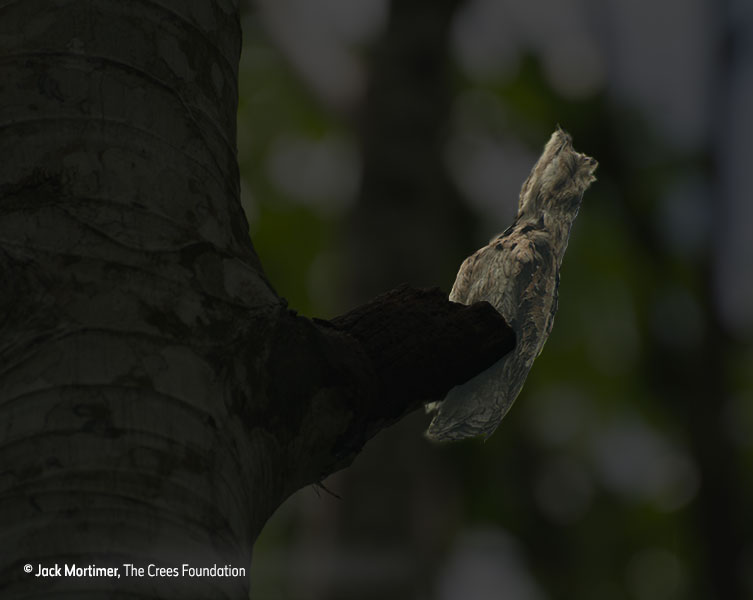 The common potoo, Nyctibius griseus, is not only coloured to look like a log, it acts like one too. Perching at the end of a dead tree branch, it tilts itself to look like an extension of the branch, and completes the trick by partially closing its normally huge orange eyes.

Found in the forests of Central and South America, the potoo trusts its camouflage and remains completely motionless, only flying away when a predator is too close for comfort. 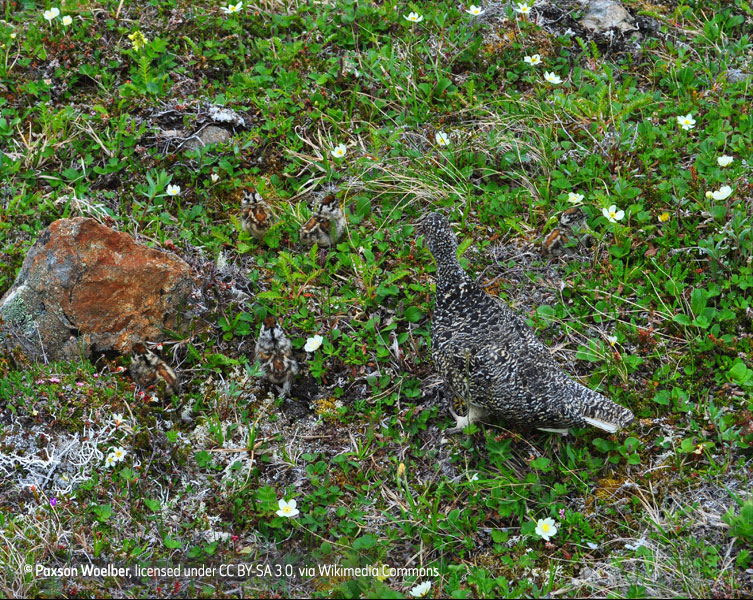 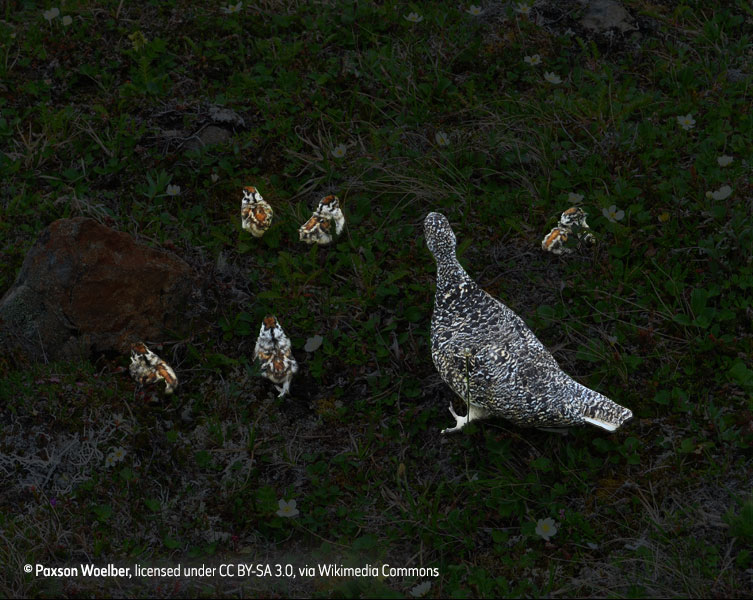 You may have spotted the ptarmigan, but did you find all five of her chicks?

The ground beneath them is a hodgepodge of colours and patterns, so instead of blending in the ptarmigans rely on a tactic known as disruptive colouration. This is when animals have stripes, spots or other patterns that break up the outline of their bodies, making them harder to pick out.

These ptarmigans, Lagopus leucura, live in Alaska and their spots and colours would be of little use in the winter, when the landscape is blanketed by snow. Instead, they change their plumage to pure white for the season. 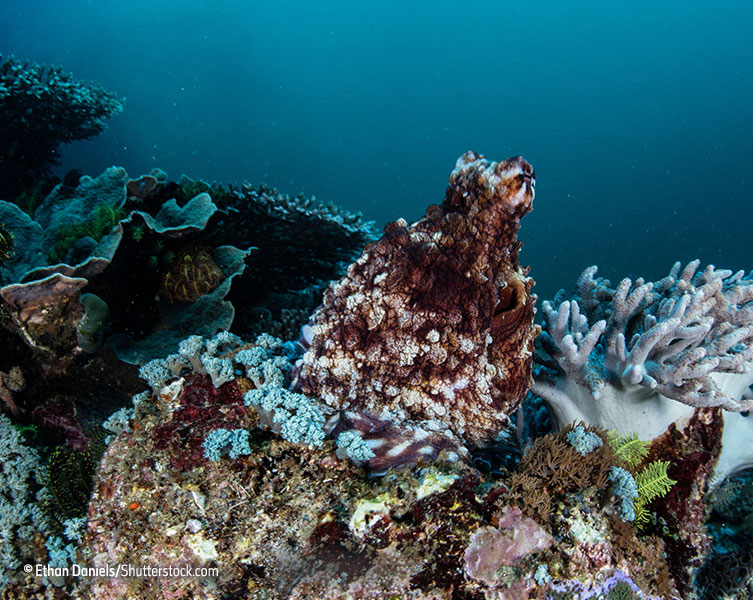 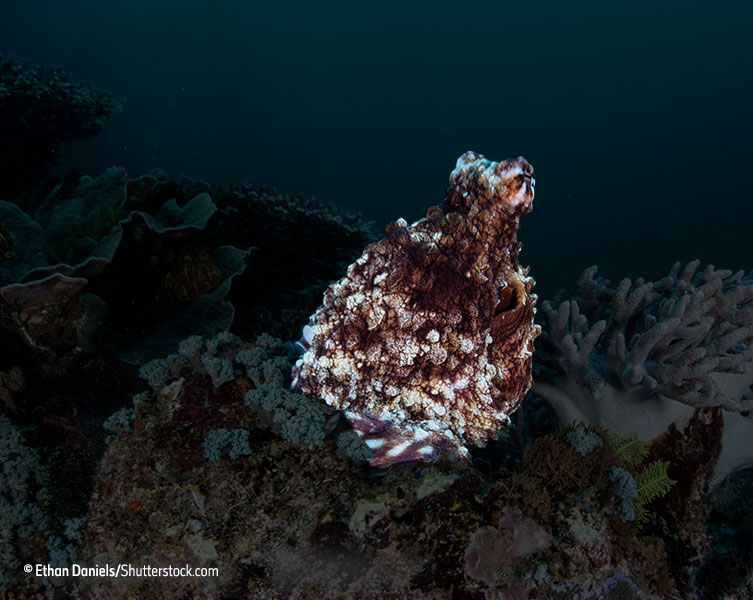 Some animals don't need to wait for a moult and change of season to fit into their surroundings.

Octopuses have many thousands of specialised cells under their skin that allow them to instantly change their colour.

Some species - such as this reef octopus, Octopus cyanea - can even change the texture of their skin to match rocks, corals and other objects on the sea floor. They do this by changing the size of special projections on their skin called papillae. 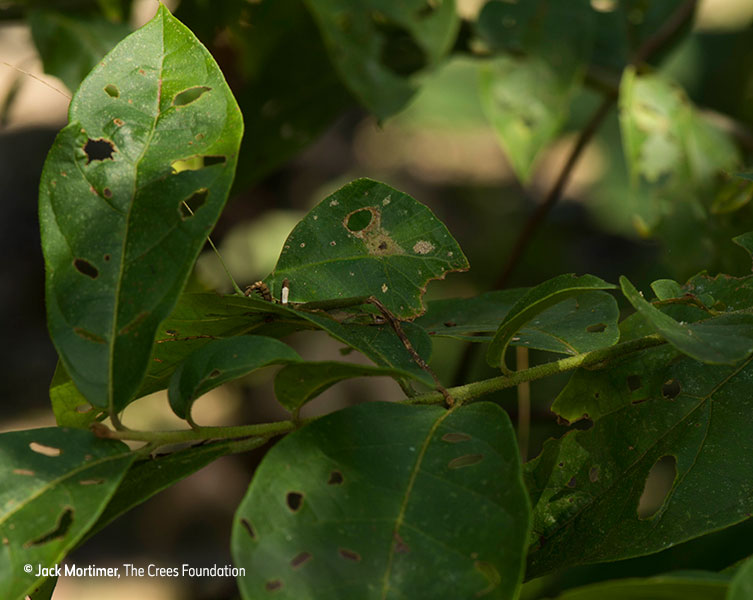 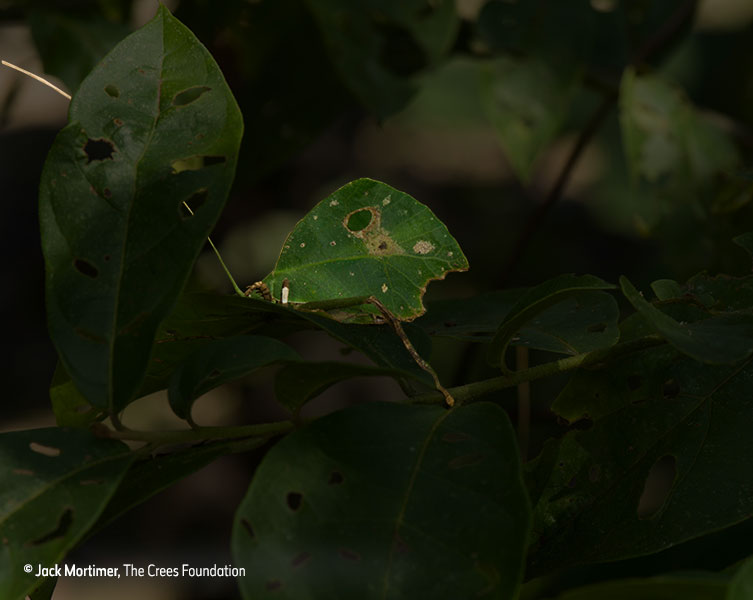 The ability to copy inanimate objects is known as mimesis. It can take extreme forms, for example in the group of insects called bush-crickets or katydids. These animals are poor flyers, so many species rely on remarkable camouflage to evade predators.

Leaf bush-crickets masquerade as leaves. These fake leaves are as varied as real ones, including a variety of spots and rough edges. Some even look partially eaten. 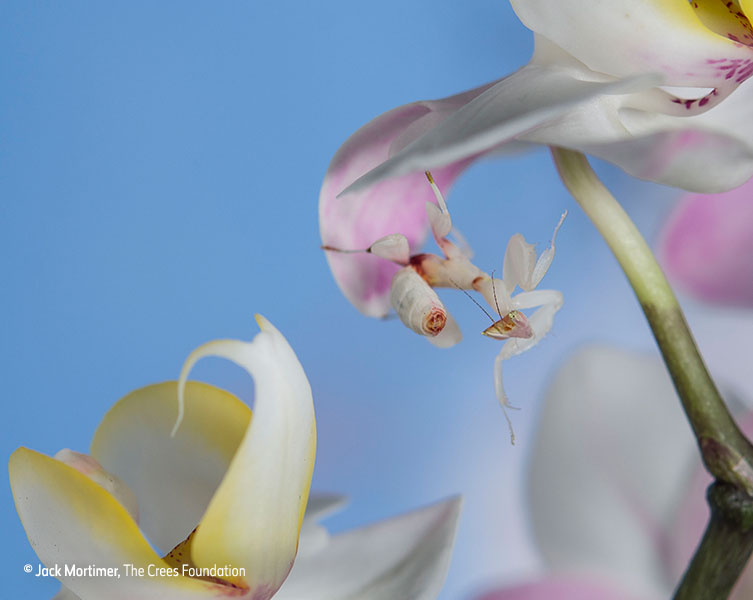 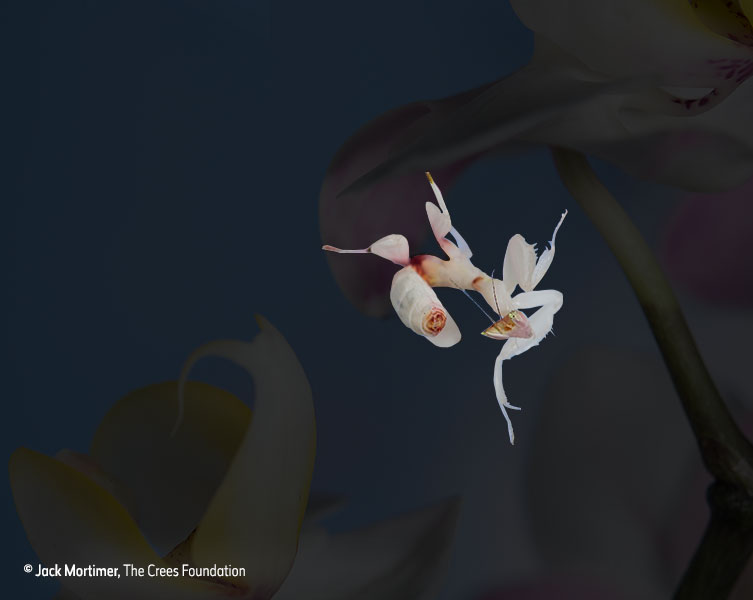 The orchid mantis, Hymenopus coronatus, would appear to be the master of mimicry, using it as an aggressive tactic to lure pollinators as prey and at the same time camouflage itself from predators such as birds.

But new research has revealed that the mantis is not trying to copy orchids specifically. To its insect prey, it looks like a number of flowers.

Imperfect mimicry is actually a clever strategy - by copying several flower species at once, the mantis can attract a greater variety of prey. 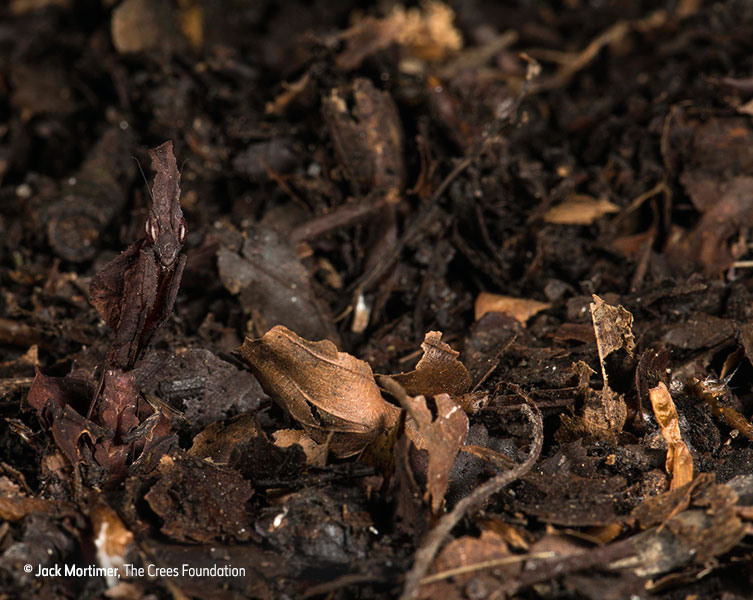 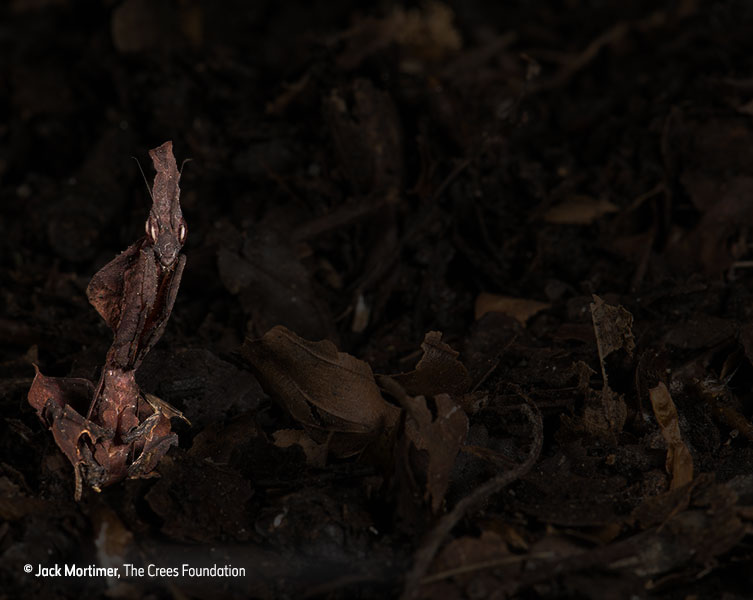 Elaborately copying the look of a dead leaf, the ghost mantis (Phyllocrania paradoxa) further proves that mantises are expert imitators. The detailed camouflage extends to 'creases' in the wings, which are actually shading created by pigments, and leaf-like protrusions from the limbs.

The mantis uses its disguise to outwit prey, as well as to hide from its own predators. 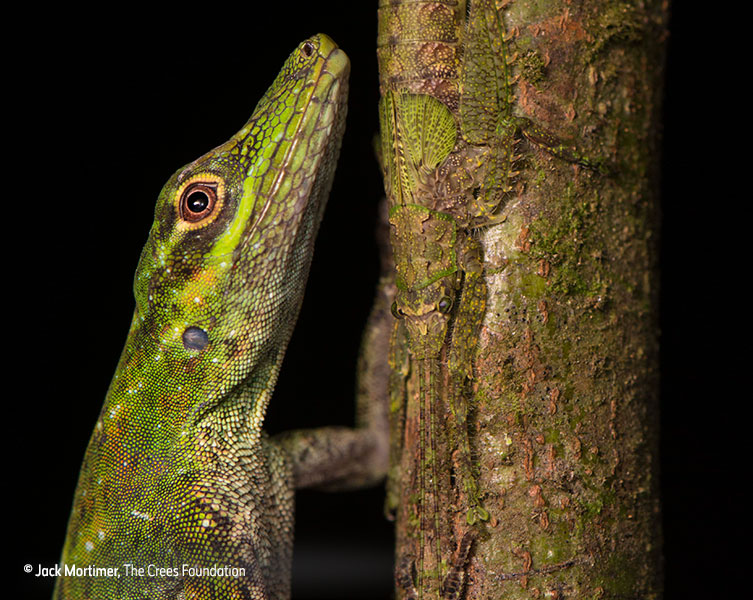 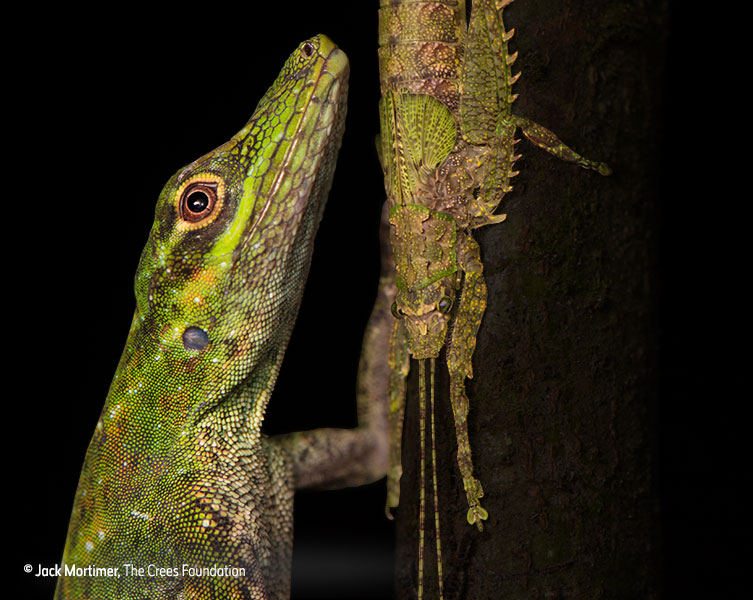 The lizard may be obvious, but did you spot the insect? Look again at the tree.

The lizard - an Amazon green anole, Anolis punctatus - is able to change its colour from grey and brown to bright green. Although some of this is undoubtedly for camouflage, their colour is also dependent on temperature and humidity, as well as the health of the animal and even its mood!

The insect is an immature form (nymph) of a moss mimic bush-cricket. Since anoles eat such insects in the wild, this bush-cricket's camouflage seems to be working well - at least when this photograph was taken. 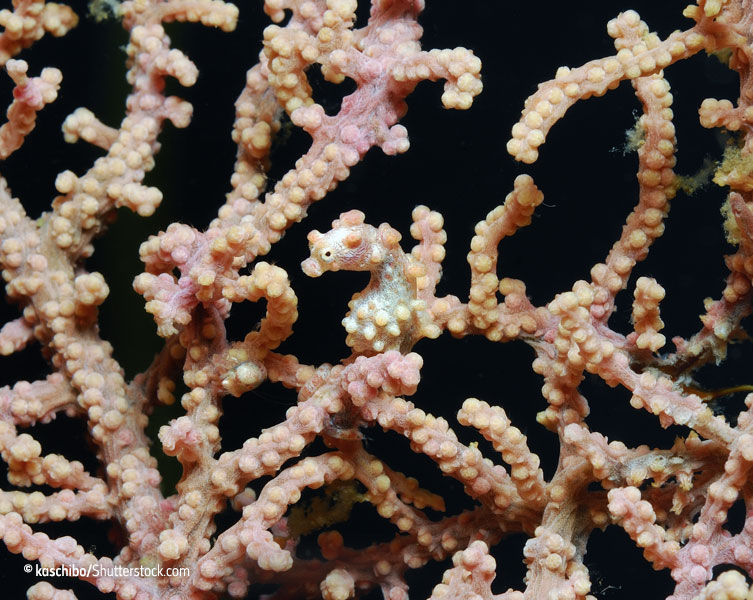 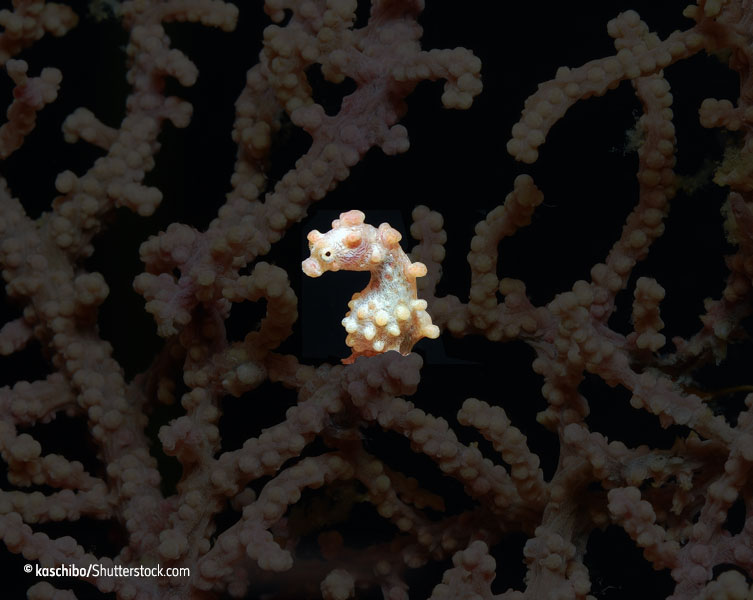 Recent research has uncovered that rather than seeking out a sea fan of a particular colour, pygmy seahorses develop suitable colouration once they have landed. The young are all dark brown and only develop their adult colour after attaching themselves to a particular sea fan. 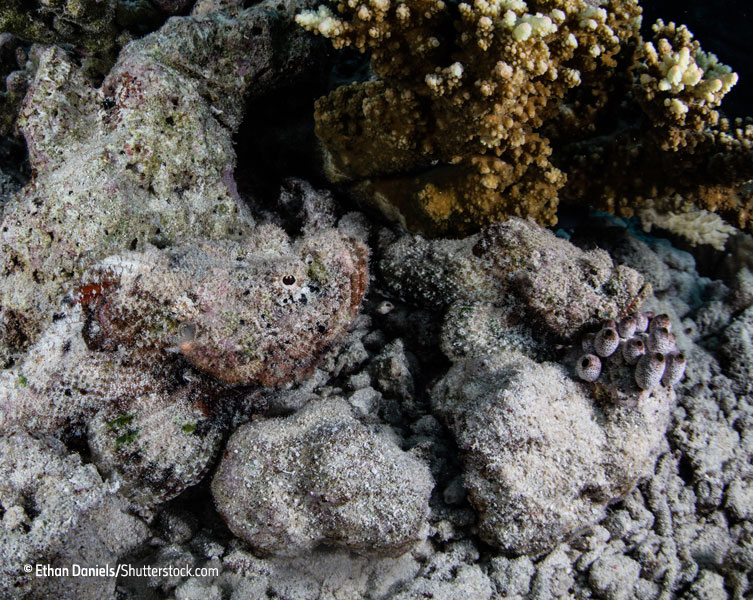 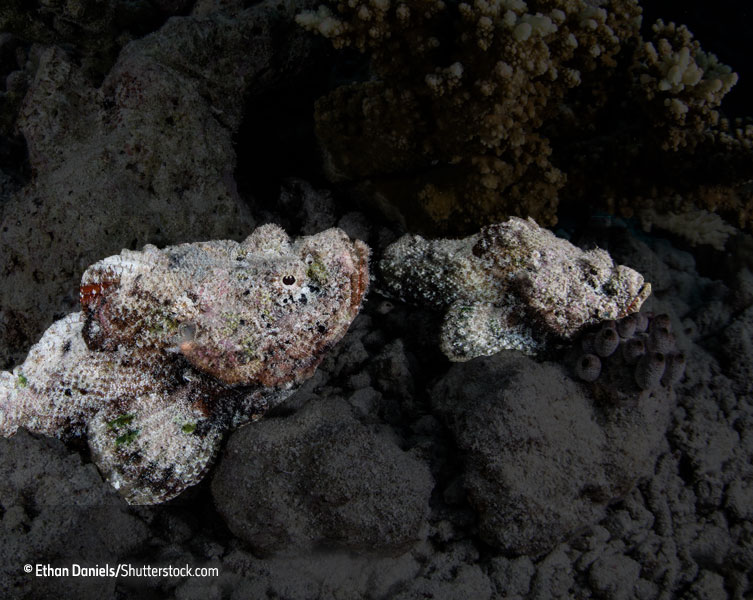 The false stonefish, Scorpaenopsis diabolus, employs several camouflage tactics to hide from its prey and strike unexpectedly. It is the colour and texture of the sand and rocks at the sea bed. It partially buries itself in the sand as an extra measure.

How did you score?

If you got 10/10, you've got a good eye - but remember that these creatures are trying to hide not from you but from their predator or prey. The orchid mantis is so successful because buzzing insect visitors are wired to seek out certain colours and don't take a second look, like you might.

Since the eye evolved there has been a continual evolutionary race - a race for survival, involving gradual changes in animals' ability to hide themselves from potential predators and the ability of would-be predators to see past this camouflage.