From accident and emergency to the greatest nature photography show on Earth, Canadian physician takes Wildlife Photographer of the Year 2015 title.

The winners of this year's prestigious Wildlife Photographer of the Year Competition were announced today at an awards ceremony held at London's Natural History Museum. Canadian amateur photographer Don Gutoski was named Wildlife Photographer of the Year 2015 by a panel of international judges for his image Tale of two foxes, a beautiful but haunting portrait of the struggle for life in the subarctic climes of Cape Churchill, Canada.

Beating more than 42,000 entries submitted from across 96 countries, Don's image will take centre stage at the fifty-first Wildlife Photographer of the Year exhibition, opening at the Natural History Museum on 16 October.

The acclaimed show celebrates the rich array of life on our planet, reflecting its beauty and highlighting its fragility. After its London premiere, the exhibition embarks on a UK and international tour, to inspire millions of people across the world to appreciate and conserve the natural world.

Cape Churchill is where the range of the red fox and the more northern Arctic fox overlap.

'The Churchill guides had heard that the two species will occasionally fight, but no one we talked to had ever seen this behaviour,' says Don.

'I first noticed the red fox hunting and interacting with some prey and on closer approach realised that prey was a white Arctic fox. By the time I got close enough to capture the event, the fight was over and the victor was feeding. I took a number of pictures of the event, until the red fox had eaten its fill, and picked up the remains to find a hiding spot for a later meal.'

Jury member and National Geographic magazine's senior editor for natural history projects, Kathy Moran says, 'The immediate impact of this photograph is that it appears as if the red fox is slipping out of its winter coat. What might simply be a straightforward interaction between predator and prey struck the jury as a stark example of climate change, with red foxes encroaching on Arctic fox territory. This image works on multiple levels: it is graphic, it captures behaviour and it is one of the strongest single storytelling photographs I have seen.'

Fourteen-year-old Ondrej Pelánek from the Czech Republic won the Young Wildlife Photographer of the Year 2015 title for his image Fighting ruffs. 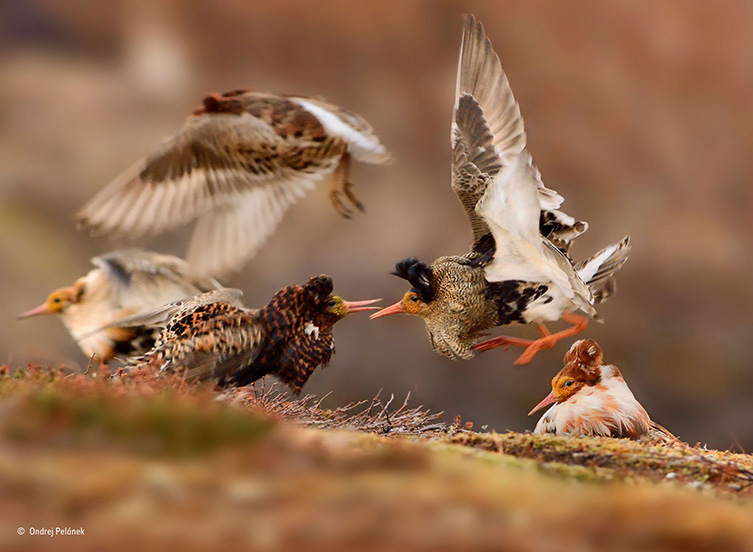 Ruffs are waders and are known for their warlike behaviour during courting. The image was taken in Norway, on Varanger's tundra, around 15 kilometres inland.

'Far away behind the polar circle we observed fighting ruffs,' says Ondrej. 'I took this photograph at midnight when my father was sleeping. I was too excited, so stayed awake.'

'This is a complex, beautifully layered photograph, a surprisingly sophisticated way of seeing that immediately generated buzz within the jury,' says Kathy Moran.

'There are lots of good photographs of ruffs on the lek, getting ready to display, but very few images that capture the behaviour with such intensity and grace. The photographer has captured a moment that speaks to powerful behaviour, yet renders it as a delicate dance. You could spend a career trying to make this photograph. That it came from one of the younger entrants was just a thrill.'

The two images were selected from 18 individual category winners, depicting nature at its finest, from displays of extraordinary animal behaviour to sublime landscapes. The competition, owned by the Natural History Museum, London, is judged by an international panel of industry-recognised professionals. Images, submitted by both professional and amateur photographers, are selected for their creativity, artistry and technical complexity.

The 2016 Wildlife Photographer of the Year Competition is open for entries between December 2015 and February 2016. Visit www.nhm.ac.uk for further information.

* These are Gift Aid prices and include an optional donation to the Museum.

Free for Members, Patrons and children under four.

For a wider selection of images or to arrange interviews with photographers or spokespeople, please contact the Wildlife Photographer of the Year Communications Officer, Rosie Pook, in the Natural History Museum Press Office.

DONG Energy is one of the leading energy groups in Northern Europe. Our business is based on procuring, producing, distributing and trading in energy and related products. We are the market leader in offshore wind energy. Headquartered in Denmark, with 6,500 employees including 650 in the UK, the business generated EUR 9.0 billion in revenue in 2014. www.dongenergy.co.uk

Press passes: If you are reviewing an exhibition or an event we can put aside a press ticket for you in advance.