About the index cards

The 290,099 5" x 3" (127 mm x 76 mm) index cards in the NHM's card archive to the scientific names of world Lepidoptera are stored in 265 metal filing cabinet drawers, which are housed on three floors of the NHM's Entomology Department. 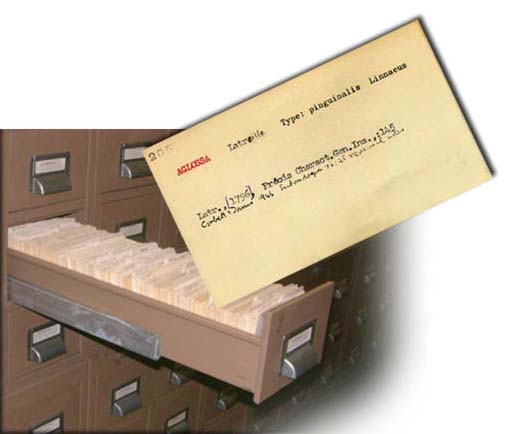 Cards are ordered within the archive: first, according to higher classification (superfamily, family, subfamily, tribe); second, alphabetically by genus; third, alphabetically within each genus by species; and fourth, alphabetically within each species by subspecies. Cards with names that are nomenclaturally unavailable (eg junior homonyms, junior objective synonyms), or names that are not currently in use (eg junior subjective synonyms), are arranged alphabetically by scientific name following the card containing the valid name currently being used for the taxon in question. Records in the LepIndex VIADOCS database are ordered in the same way. Please note that information on the card image and/or in the 'Current Status' field of the database will state whether a name is nomenclaturally unavailable or not in use. In the case of the card images, junior subjective synonyms are sometimes indicated by the abbreviation 'syn.', but more commonly simply by the word 'of', eg 'of lutea' if the name is currently treated as a junior subjective synonym of the taxon named lutea.

The index cards are usually type-written, but a significant minority of them are entirely hand-written and very many contain hand-written annotations. Information on the cards is laid out in a standardised format.

A representative index card for a species name, showing how information is typically arranged.

How journal and book titles are abbreviated on the cards

Titles of journals have usually been abbreviated following The World List of Scientific Periodicals (Edn 4) or, if not included therein, according to the methods used in that edition. Nouns always start with a capital letter and adjectives with a small letter, unless it is customary in the country of origin of the journal for the word to begin with a capital, for example, Bull. mens. Soc. linn. Lyon but J. Proc. Linn. Soc. Similarly, Annls Mus. r. Hist. nat. belg. but Proc. R. ent. Soc. Lond. Abbreviations are followed by a full stop but contractions are not - for example, Coll. for College, but Colln for Collection; Stettin. for Stettiner, but Stettin for Stettin itself; univl. for universalis, but univl for universal. One other irritation, J. is for Journal, except in those references in which it is followed by a one letter abbreviation; it is then cited in the World List as Jl - for example, Jl N.Y. ent. Soc. Titles of books and other works have been abbreviated as though they were journals, following the Select List of Abbreviations Used in volume 3 of the World List.