Piece of a giant puzzle 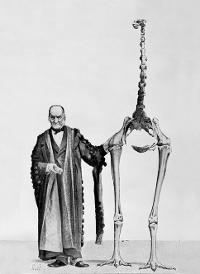 Richard Owen, first superintendent of the Museum, holding the moa bone fragment standing next to a complete moa skeleton.

This fragment was the first evidence moa existed. Richard Owen, first superintendent of this Museum, used his great anatomical knowledge to predict it belonged to a giant flightless bird. 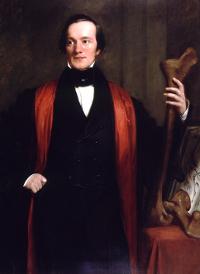 Richard Owen dressed in the robes of Professor of Comparative Anatomy at the Royal College of Surgeons, holding a moa bone, 1844.

Owen’s aptitude for understanding animals by examining their anatomy was unrivalled. This skill and his fierce ambition took him to the top of his profession.

The most respected and influential scientist of his generation, he pioneered the science of comparative anatomy, studying the physical similarities and differences between species.

Many thought the duck-billed platypus (Ornithorhynchus anatinus), described by Owen, was a fake animal when first discovered.

When Owen was in his prime, Europeans were still roaming far-flung places, returning home with creatures beyond their imaginations.

Owen was often the first person to examine these curious new finds. Scientists around the world sought his opinion. This privileged position made him the first to describe many hundreds of new species. 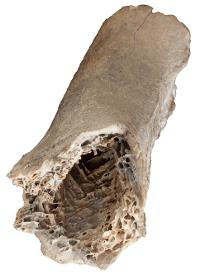 Owen’s most dramatic scientific triumph came in 1839 when he studied this short fragment of bone from New Zealand. It didn’t give him much to go on.

He meticulously compared it with bones from 14 other species, including humans, kangaroos and even a giant tortoise and made a bold prediction as to what it was.

The honeycomb structure inside was like that of bird bones, making them light enough for flight. But this bone was much bigger than any known bird’s, even hefty flightless ostriches.

Owen deduced it must have belonged to an even more enormous extinct flightless bird. Four years later the world was astonished when more bones revealed he was right.

No match for humans

No one in Europe had seen anything like this monstrous bird before. By the 1760s, when Europeans first arrived in New Zealand, the moa was already extinct. 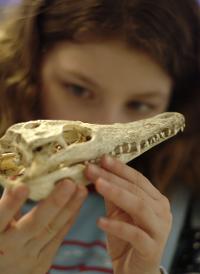 From a meteorite to a fossilised dinosaur bone, examine some of the Natural History Museum’s specimens yourself. Go to the Investigate Centre, in the Green Zone.