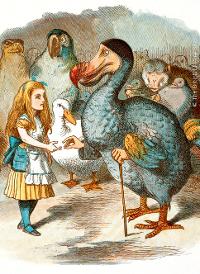 Illustration by John Tenniel from Alice’s Adventures in Wonderland by Lewis Carroll, 1890.

This bird was one of the first widely recognised cases of human-caused extinction. Its fame was secured by Lewis Carroll in his book Alice’s Adventures in Wonderland.

There are so few complete dodo skeletons we may never know exactly how they looked or lived. This is a composite, made from different individuals.

The speed of their extinction left little evidence of their existence. One hundred and fifty years after they vanished, some naturalists even claimed dodos were mythical creatures invented by sailors. Others struggled to interpret the meagre bones left behind. 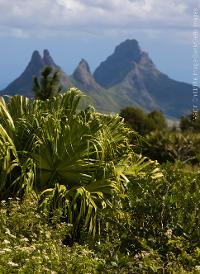 So where did the dodo come from? More than 26 million years ago, pigeon-like birds found paradise while exploring the Indian Ocean: the Mascarene Islands.

With abundant food and no predators, the birds had no reason to leave. And so, over the years their descendants slowly grew bigger and heavier, their beaks grew larger, their wings smaller: dodos evolved.

Death of the dodo

Life was good for dodos until humans also discovered the Mascarenes, in the late 1500s.

Some fell prey to sailors looking for a change in diet, others to the rats, cats, pigs and monkeys the sailors brought with them. Dodos themselves may have gone hungry as the invaders cleared forests rich in fruits. 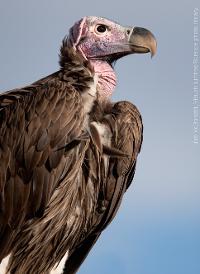 Examining the inadequate evidence available, some scientists suggested dodos were related to cuckoos, others to chickens, ostriches, penguins, snipe, ibis, cranes or eagles.

Even master taxonomist Richard Owen was convinced they were descended from vultures. Owen was so determined to be the first to solve the mystery he resorted to cunning means.

Illustration of dodo specimen from Richard Owen’s The Dodo, 1848.

Owen heard some rare dodo specimens were on their way to a potential rival, and had them intercepted.

These bones joined the collections of this Museum, and in 1866 Owen’s devious means meant he became the first person to publish a scientific description of the dodo. 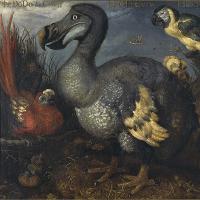 The obscure dodo shot to scientific fame amid the fierce debates over evolution. Why did it look so different to its pioneering ancestors?

Darwinists believed it had adapted to its environment. But Owen argued its easy life caused God’s archetypal dodo to degenerate.

Regardless of how it evolved, it’s clear the dodo was made extinct not by nature, but humans. 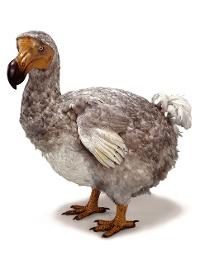 What did the dodo really look like? Take a look at an ancient and modern interpretation of the dodo in Images of Nature, in the Blue Zone.