Home / Events / The 2019 Marsh Awards for Palaeontology, Mineralogy and best Earth Sciences book of the year

The 2019 Marsh Awards for Palaeontology, Mineralogy and Best Earth Sciences Book of the Year 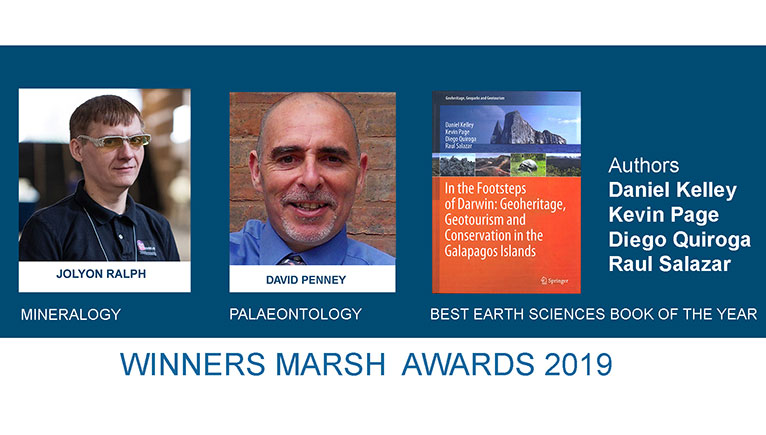 The winners of the 2019 Marsh Awards

The Marsh Awards recognise unsung heroes who have made a major contribution to the promotion of palaeontology, mineralogy or earth sciences.

The Palaeontology and Mineralogy awards recognise contributions made in the UK, which could include:

The Best Earth Sciences Book of the Year award recognises the achievements of authors who have published outstanding scientific or academic books in the field of Earth Sciences in the UK or abroad.

A certificate and £1,000 prize is awarded for each award.

The awards ceremony will be in the Flett Theatre of the Natural History Museum, London on 13 December 2019. As part of the awards ceremony, a lecture will be delivered by Prof Ian Crawford, vice-president of the Royal Astronomical Society. He will speak on 'The Future Exploration of the Moon'.

Attendance is free but registration is required. Please complete and submit the form below to M.Richter@nhm.ac.uk by 12 December 2019.

More about the Marsh Awards

The awards are the creation of Brian Marsh OBE, chairman of the Marsh Christian Trust, who wanted a vehicle to recognise 'unsung heroes and heroines', people who are passionate about what they do and devote their time to improving the world and our knowledge of it.

The trust runs a scheme of some 80 awards in partnership with organisations across the fields of heritage, the arts, social welfare and conservation.

The event is free but registration is required. Please complete and submit the registration form by 12 December 2019.