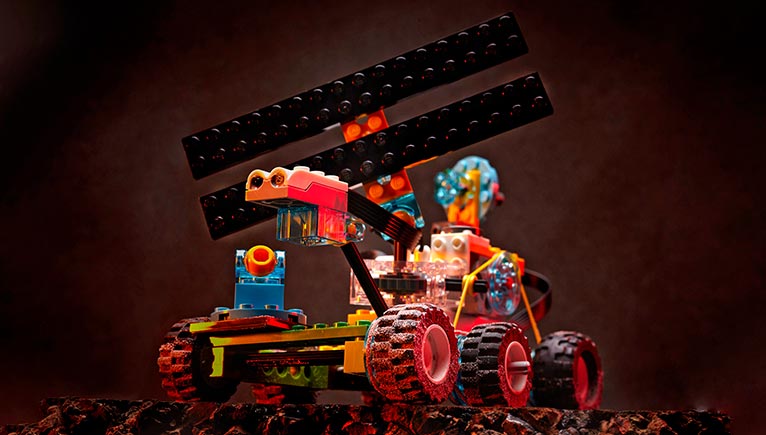 Exploring and understanding Mars has become one of the key challenges in space exploration. From remote sensing to landing rovers, our Museum scientists are actively involved in learning more about the red planet. But how do we study a planet that is millions of miles away?

In this workshop, pupils work in small teams to design and build a LEGO Martian rover. They then code, test and evaluate their designs.before seeing how their rovers perform on a realistic Martian surface.

This workshop has been created in partnership with the LEGO Group and LEGO Education Partner, Raising Robots

We welcome home educator groups booking onto this workshop. However, please note that there is a strict minimum age of 7, for all participants, and we cannot permit accompanying younger siblings into the workshop space. This is due to hazards associated with small parts.

Additionally, students participating in the workshop must still be accompanied by an adult at all times. For more information on planning a home education group visit, please see here.

During the current closure

The Natural History Museum is temporarily closed as of 17 March 2020 until further notice.

All school and group visits are cancelled during this time.

At present we are unable to reschedule visits owing to the indefinite timeline of the Museum’s closure.

If you have paid for your scheduled activities and would like to reschedule we will retain your booking on our system. When we reopen we will be in touch to reschedule your cancelled visit to an alternative date.

If you have not paid for your scheduled visit we will cancel your booking.

If you would prefer a refund please contact us via email (school-bookings@nhm.ac.uk) with your booking reference and school name and we will update you on the refund process and request the additional information that we require.

Owing to the large volume of bookings for our learning programme this process may take some time and may not be actioned until we reopen.

Everything you need to know for a smooth-running day, from where to go for lunch to completing a risk assessment.

Browse the full range of our school workshops and shows.

Explore the evolution of life on our planet in the From the Beginning gallery.

Some of nature's most unique and valuable treasures are on display in the Vault gallery.

Booking a visit is free.