Wildlife Photographer of the Year finalists document the desperate story of the world's most trafficked mammal.

Time is running out for the pangolin - populations have declined by up to 80% in just a decade.

Poachers kill hundreds of thousands each year, largely because the hard scales covering their bodies are thought to be medicinal in some communities. Despite international laws protecting the pangolin, the killing continues.

It's more than a sad story of extinction: agriculture could also be affected if these shy, burrowing mammals are lost. Pangolins live on a diet of insects, and by devouring millions of them around crop plantations, these mammals protect food supplies.

Finalists in the Wildlife Photographer of the Year competition have been highlighting their situation.

The above image, The pangolin pit, by conservation photojournalist Paul Hilton, was featured in the 2016 exhibition. It shows about 4,000 dead, frozen pangolins that were seized by Indonesian police.

Paul says, 'I've been following the pangolin trade for over three years. There have been several occasions when I've mentioned my work and people hadn't even known what a pangolin is.

'They are on the brink of extinction, and lots of people still don't seem to know what they are. This is why I'm doing this - the pangolins need our support. People need to know what's going on.

'Photography is the tool to use because it transcends language and gets this conservation message across regardless of country or nationality.'

During the day they sleep in burrows, and sniff out food after dark with their long snouts and sticky tongues. Their main defence against predators is their set of hard, overlapping scales, as shown in this image by photographer Lance van de Vyver.

Lance had been tracking a pride of lions for several hours when they happened across this pangolin and started to 'roll it around like a soccer ball'.

Louise Tomsett, the Museum's Mammals Curator, says, 'The scales help pangolins to dig burrows as well as act as armour, and some species also use them to climb trees.

'Pangolins curl up into a tight ball when threatened, rendering them virtually impenetrable, even to a lion's teeth. Unfortunately this also makes them rather easy for poachers to pick up and carry.'

The international trade in pangolin meat and scales is huge, with confiscated shipments often amounting to tonnes.

Louise says, 'The main drive for trade is the false idea that pangolin body parts are medicinal. Alleged benefits range from curing acne to curing cancer, and they are used as traditional medicine in China and Vietnam.

'In some countries, the meat is a status symbol because it costs so much. In other places, pangolins are used as bush meat, for indigenous folk rituals, and for leather goods.'

Pangolins are easily stressed and many die during trafficking. They are difficult to keep in captivity because little is known about their biology and care, and a continuous supply of live ants and termites is hard to source.

Pangolins have rarely been bred successfully, so populations will continue to fall if nothing is done to stop poachers.

Their disappearance could have serious effects on agriculture in some communities.

An adult pangolin may consume an estimated 70 million insects every year, providing natural pest control in areas where termites would otherwise cause substantial damage to manmade structures.

It is estimated that pangolins save millions of dollars per year in pest control.

Louise adds, 'Pangolins provide value in controlling insect populations within an ecosystem, and they benefit humans considerably. It is also thought that their digging action during feeding helps to get air into soil and turn it over regularly.'

The fight to save them

Global research is helping to combat the plight of the pangolin.

Pangolins feature in the Museum's collections, which are used by researchers from all over the world. Beyond providing specimens for display in the galleries, the Museum's pangolins play a much bigger role in global science.

Louise says, 'The pangolin specimens we hold contain a wealth of information, much of it waiting to be unlocked.

'The geographical information can provide historical species ranges, and tissue samples can be analysed to show the genetics of different populations.

'Tissue samples can also reveal the movements of one individual throughout its life. All of this information is extremely valuable for conservation.'

Wildlife Photographer of the Year

Uncover stories of conservation and see stunning images of nature in the Wildlife Photographer of the Year online gallery. 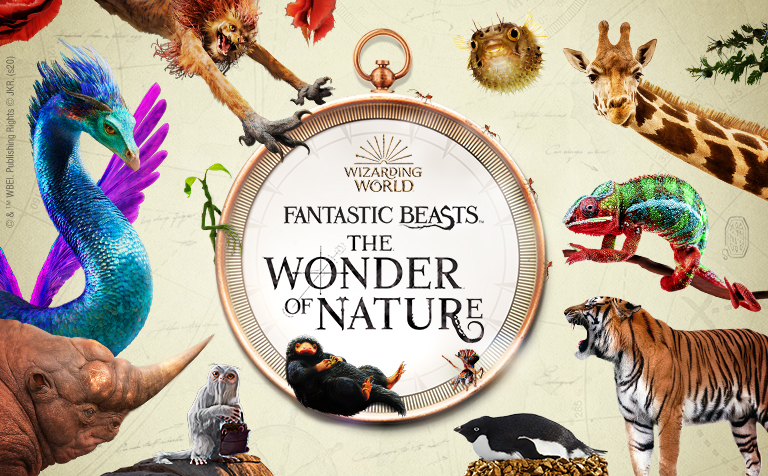 We're working towards a future where both people and the planet thrive.

Hear from scientists studying human impact and change in the natural world.

The time is now

Wildlife Photographer of the Year tells the incredible stories of life on our planet through powerful photography and expert insight.

Prepare to be charmed

Discover our range of gifts, inspired by the Fantastic Beasts™: The Wonder of Nature exhibition.